As a trans-femme on HRT, I would like to know the concentrations of estradiol in my blood at all hours of day. This is useful as the peak, the trough and average all have effects. However, I only get blood tests a finite number of times per day – usually once. I am not a medical doctor, but I am the kind of doctor who can apply scientific modelling to the task of estimating curves based on limited observations. I am honestly surprised no one has done this. The intersection of trans folk and scientific computing is non-trivial. After all, the hardest problem in computer science is gender dysphoria.

To do this we are going to use probabilistic programming, to get a distribution of possible level curves. This is a great use-case for probabilistic programming. We have a ton of domain knowledge, but that domain knowledge has a few parameters we don’t know, and we have only a little data. And crucially we are perfectly fine with getting a distribution of answers out, rather than a single answer.

We begin by considering the shape of the curve. The way levels change over time is the single largest piece of domain knowledge we have. We wish to construct a parameterized curve where the shape can be varied by adjusting to parameters.

In this blog post on Sublingual versus Oral Estrogen they approximated the estradiol function with a linear to the peak then an exponential decay.

I plotted points from the sublingual estradiol curve, and came up with an estimate of the estradiol function from 1 hr to 24 hours as being 350.54*(HOURS^-0.907). From 0 to 1 hours, I estimated the estradiol level linearly, as 451*HOURS.

I am today interested in the estradiol function for estradiol gel. It’s the same shape, so a similar strategy should apply. 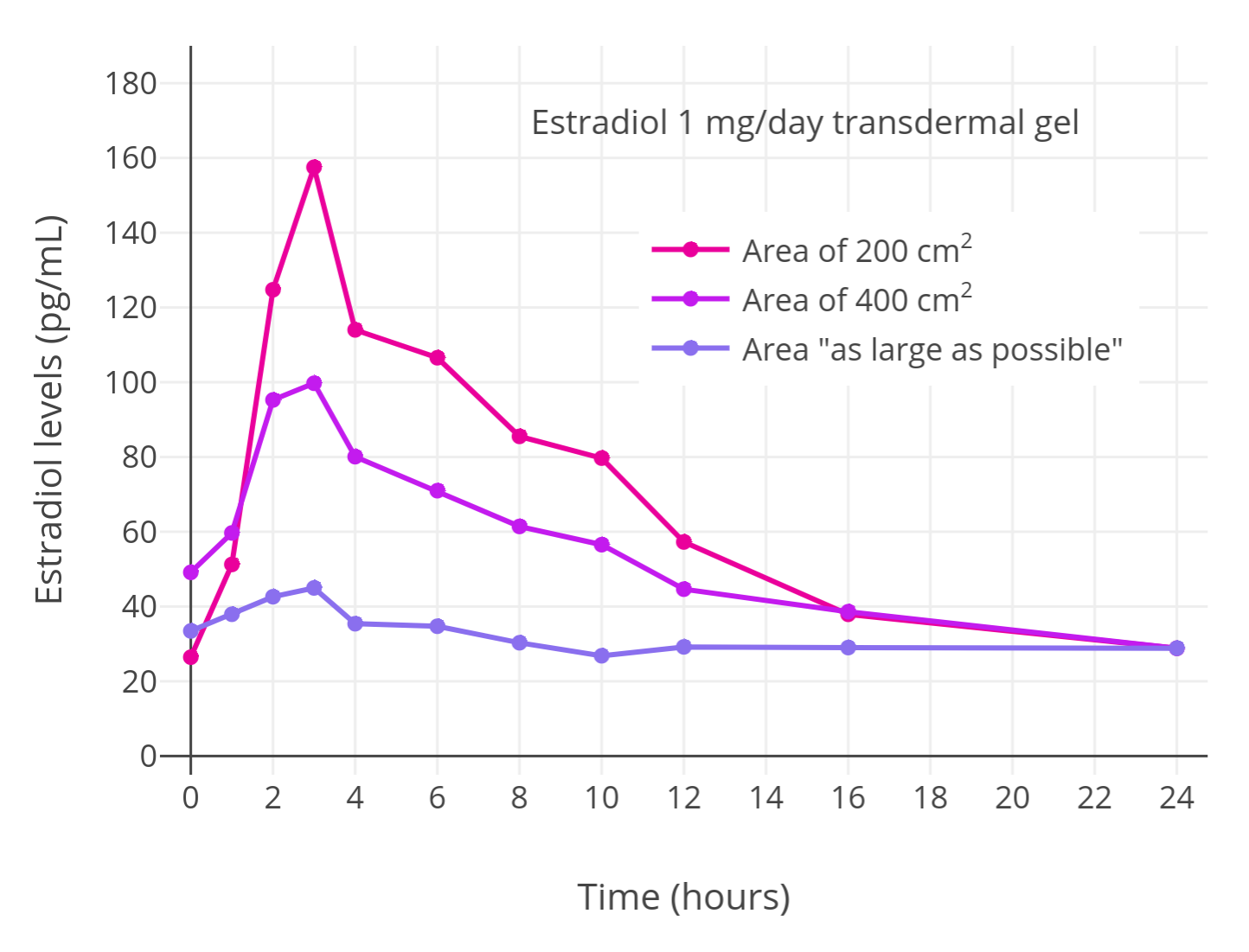 These 3 curves in that study were from applying the gel over larger or smaller areas. For our purposes that doesn’t matter. We instead can think of them them as 3 different realistic curves, which have some differences based on various causes (be they application area, location, physiology etc). We will then estimate the parameters of those curves.

Before we do anything else though, we start by setting up our Julia environment.

The curve we want defines the current blood concentration of estradiol c at time t hours after application of the gel. It is described by 3 parameters:

(The same curve, with different parameter values likely works for other methods of adminstration) We express this as a higher order function of the 3 parameters, which returns a function of time t.

Let’s see how we did. I am going to plot the data from Järvinen et al against curves using my formula, best fit by my own inspection. I am downshifting all the data from Järvinen et al by 25 pg/mL, as that data was from post-menopausal cis women, who produce about 25 pg/mL of estradiol on their own before you take into account HRT. We only want to model the HRT component.

By looking at these plots, it seems a pretty decent model. Of-course with enough degrees of freedom, you can fit an elephant. However, we have 10 points and only 3 degrees of freedom, of which we only varied 2 of them across the 3 datasets. So it seems like we are good.

It’s broadly biologically plausible. We expect a fast initial absorption, that should end at some point in few few hours. Since it is fast and short, it doesn’t really matter what we model it with, so linear is fine. Then we expect a tail off as it is consumed. It makes sense for the rate of absorption to be related to the quantity remaining – which suggests some exponential. We see this kind of thing very frequently in biological systems. This all might be nonsense, I am no systems biologist.

Now I just fit those curves by eye. We can find the the most likely parameters via least squares regression. For this we can use LsqFit.jl, normally I would use Optim.jl and write the least-squares problem out myself, and use L-BFGS to solve it. But LsqFit.jl’s Levenberg-Marquardt algorithm is more appropriate.

That is indeed a nice close fit.

This least square fit is a maximum likelihood estimate (MLE), it is the curve which maximizes the likelihood of the parameters. But really we are not after a single curve at all. We are interested in distributions over possible curves, given the observations. These tell use the possible realities that would explain what we are seeing.

To begin with lets think about our priors. These are our beliefs about the values the parameters might take before we look at the data. 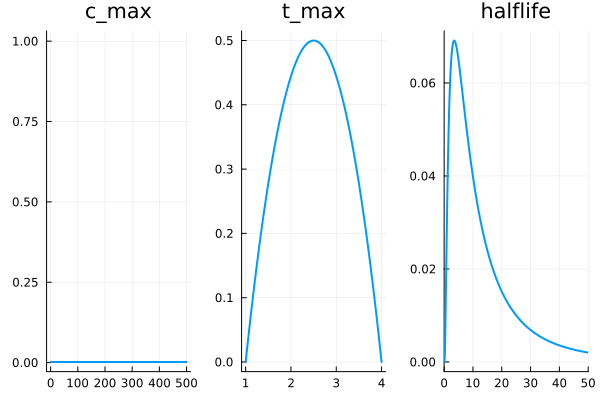 The other component we will want is an error term. We want to express our observations of the concentration as being noisy samples from a normal distribution centered on the actual curve we are estimating. So we need an error term which will allow some wiggle room about that curve, without throwing off the inference for the real parameters. We will define a variable called err which is the standard deviation of this error term. Our prior on this error term should be positive with a peak at 0 and rapidly tailing off. Gamma(1, 1) meets our requirement. 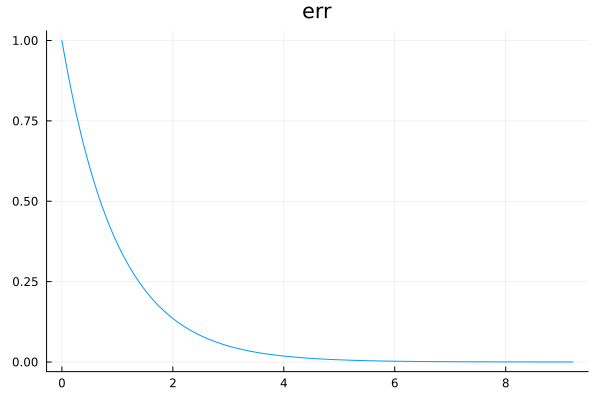 So let’s look at the distribution over curves (as represented by samples). 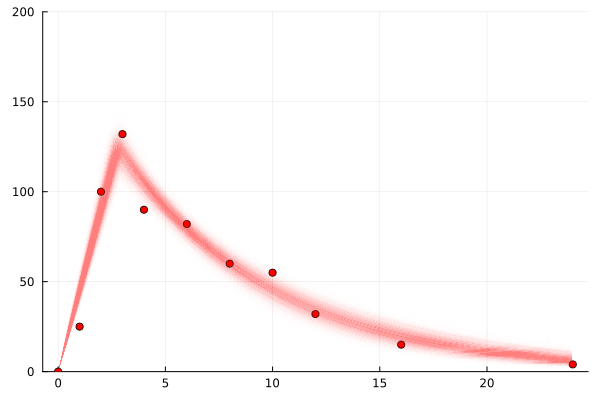 We see this nice kinda clear and fairly small range of values for the parameters: c_max, t_max, halflife. The error term, err, is quite large

Now that we have shown we can do inference to find distributions over parameters that fit the data let’s get on to a more realistic task. No one gets blood tests every few hours outside of an experimental data gathering exercise. The most frequent blood tests I have heard of is every 2 weeks, and most are more like every 3-6 months. So what we are really interested in is inferring what could be happening with blood levels from a single observation.

The practical case is applying the gel in the morning before work, and getting a blood test toward the end of the work day just before the phlebotomist closes. So we will look at the sample for c8, the blood concentration 8 hours after dosing. And we want to see a distribution over all possible estrogen level functions that would lead to that observation. This is what it is actually all about. 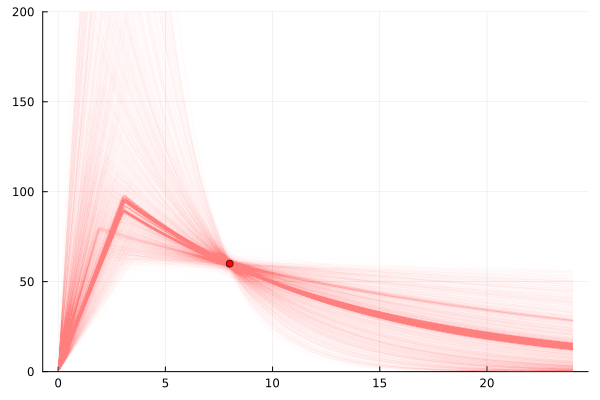 So that’s actually really informative. There are a range of possible explanations. From a very small t_max and a large c_max meaning it peaked early and has tailed off a lot, to the more likely ones which look more like the kind of curves we were seeing based on the experimental data with more frequent measurements. This is really cool.

We can add more observation points and cut-down the number of realities we might be in. This realistically is actually a practical thing to do. Each point is a blood test – in London trans folk can get them free in the evenings a few days a week at 56T Dean St or CliniQ. In theory some NHS GPs will also do them for trans folk, but many (including mine) will not because the NHS is systematically transphobic and doctors think trans folk are too complex for them. So to get a few in one day you would need to pay privately about £50. Which is nice that we know exactly how much each observation costs.

So we can simulate adding another observation. You can see in the following plots that if we add a reading of 60 at 8 hours after application we break the possible universes into two possible sets of explanations. One set where the 3 hour reading is while it is still rising, and one set where it is falling. 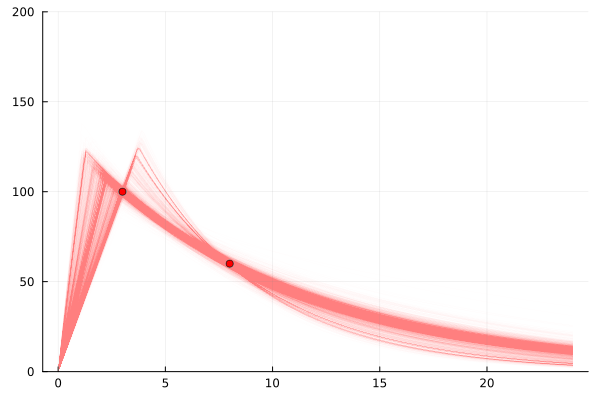 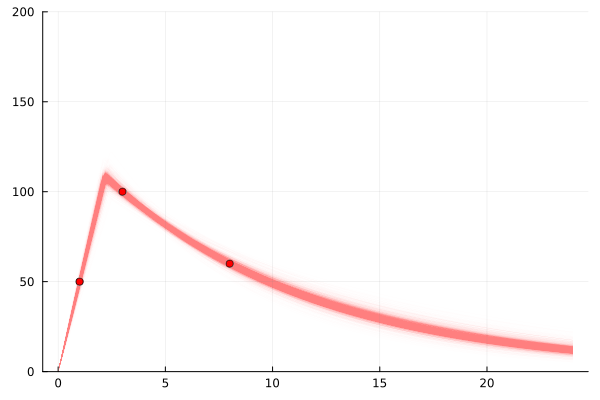 It is worth noting that while these 3 points do lead to a relatively small set of possible worlds, this is not always the case. Unlike for fitting a multivariate linear (or a number of other curves) one point per degree of freedom is not enough. For example if all points could be during the first piecewise segment, we know even less about the state of the world than if we had 1 point in the tailing off segment (especially if those points suggest a large error in the readings err) 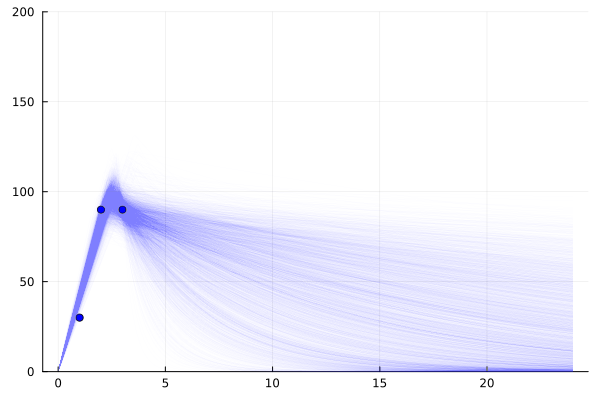 This is just a first look at this topic. I imagine I might return to it again in the future. Here are some extra things we might like to look at:

Probabilistic programming is a cool technique for working on pharmacodynamics. It lets us handle the fact that we have many unknowns about people’s individual biology, while still narrowing down a possible set of worlds they might live in.

Note: feedback from probablistic programming folk have told me that this could be much improved to give more samples that are better representative of the true distribution. At some point I will try and integrate them into this post. Until then see this issue.